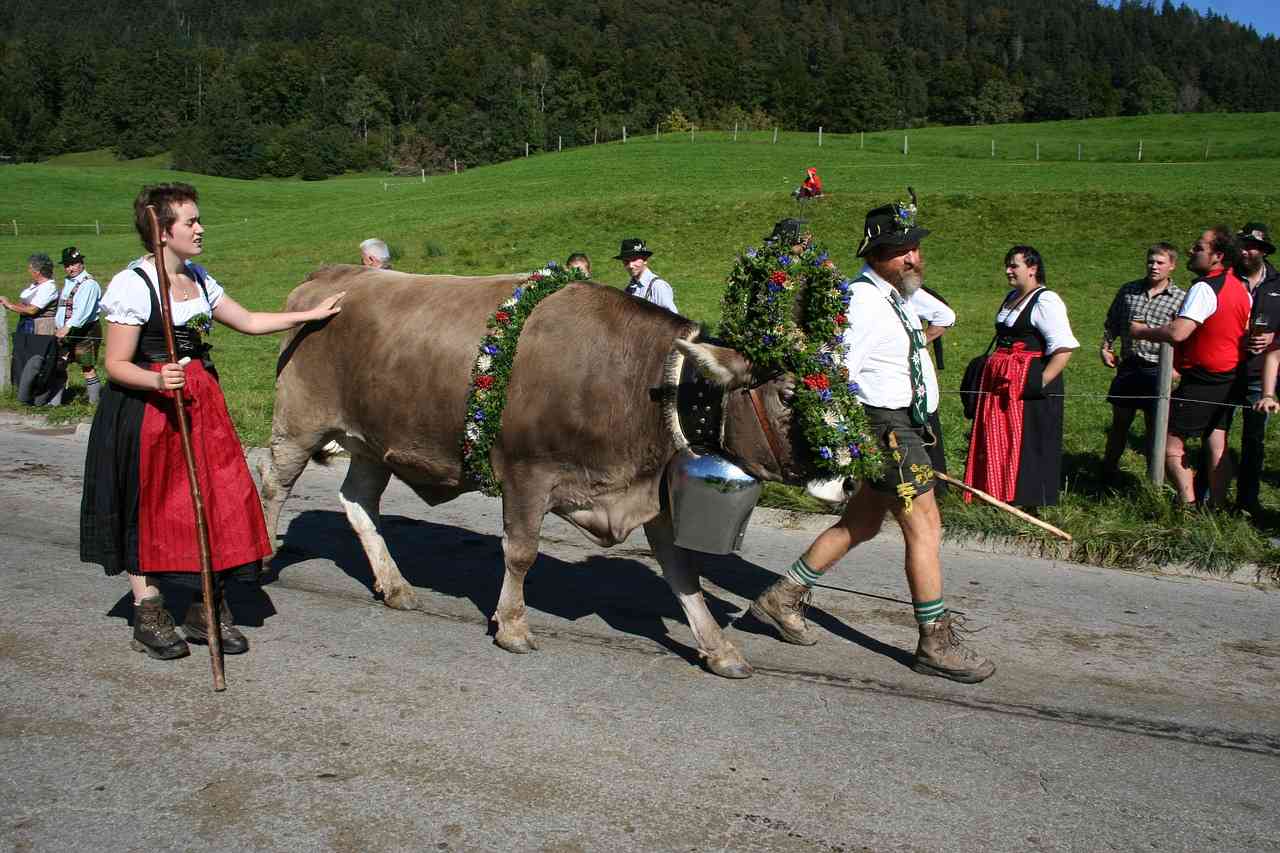 Switzerland is not only a country with stunning mountains, beautiful waterfalls, pristine lakes, and lush green valleys but an amalgamation of various cultures of different European neighboring countries such as Germany, Italy, France, and others. The cultures symbolize the ethics and traditional clothing of Switzerland.

Switzerland is home to different kinds of cultures, ethnic groups, and even climates. This has led to significant variations in traditional Swiss clothing as well as in modern times.

PIN IT FOR LATER…

This post may contain affiliate links. If you buy something through one of those links, you won’t pay any extra penny, but I’ll get a small commission that encourages me to deliver more helpful content for you.

The traditional costume of the common people in Switzerland, however, remains much more distinct, with variations based on the canton, gender, and occupation of the person.

The female traditional outfit is very embellished with pretty and traditional accessories. The male folk dress is very simple and ordinary, and in some other parts of the country, it looks rather aristocratic and stylish.

The national costume of Switzerland is multifaceted but made in the same style and design; bright but sober; eccentric but balanced; convenient but enticing.

Traditional Dress of Switzerland for Men

The Swiss men in Alpine region generally wear the lederhosen, which is basically knee-length pants with suspenders, often made from leather. Lederhosen is flexible, durable, and also helps to climb and hike in the mountains terrain.

READ NEXT:  Tips to Get the Best of Switzerland in 2 days with Low Budget

Short-sleeved shirts(mainly white), woolen medium knee-socks, and black slip-on shoes are also worn by Swiss men. They also preferred to wear a short-brimmed felt hat in the winter season and a wide-brimmed straw hat in summer. It adds extra beauty and gives completeness to their traditional outfit.

Fun Fact:  Bachelors keep a bright red handkerchief hanging from the left pocket of their trousers. It indicates that the man is unmarried. It’s an unusual tradition of men in Switzerland and very convenient for Swiss women who are also single.

Traditional Costume of Switzerland for Women

The traditional attire of Switzerland for women is quite like today’s “dirndl“, which is basically a full skirt and a tight sleeveless top. The top is usually white in color, and the rest of the outfit is finished with colorful decorations and accessories like stockings, buckled black slip-on shoes, and a headpiece or hat. Women often wore aprons around the waist to protect the clothing while working.

Check out the pictures of the traditional clothing of Switzerland below.

The color of the clothes is the main factor for Swiss women. They generally like to wear a bright color and the color of their costume indicates the canton, marital status and so on. Women from Obwalden canton wear white color whereas the typical clothing color for Zurich canton is blue.

Even the jewelry is different for different cantons and can be a definition of marital status. In Obwalden, married women wear white bonnets and golden jewelry whereas single women wear silver.

Traditional Dress of Switzerland for Children

Traditional Swiss dress for children is basically a miniature version of the costumes worn by adults, with the differences in color to reflect the gender of the wearer. Boys tend to wear darker colors such as black, blue, and gray, whereas girls prefer to wear red and white.

Tights are the most convenient, flexible, and easy to carry traditional Swiss fashion. You can purchase tights from the store while some Swiss families are still continuing their tradition of making hand-knitted tights (selbsgestrickten) especially made for babies.

READ NEXT:  Top 10 Best Places to Visit in Switzerland

It’s very common among the Swiss to decorate clothing with traditional embroidery. Swiss girls are trained from their childhood and they are expert to stitch on hats, scarves, and shirt cuffs. Embroidery also decorates fabric and usually, the flowers which can be found in the Swiss Alpine are embroidered on clothing.

Smocks are another traditional Swiss costume worn by Swiss-Italians and Swiss-French boys and girls. Mainly, smocks were used as school uniforms. The smock is also used in the parade, festive occasions, work, and much more!

Nowadays the Swiss generally wear western-style clothing, but when it’s time for traditional festivals, they still wear the traditional dress of Switzerland which was worn by their ancestors at parades and festivals.

In most festivals, the cattle herders of the Gruyere, offbeat place of Switzerland wear a short red canvas jacket over a half sleeve shirt and a black trouser. The women wear silk aprons, long-sleeved jackets, and straw hats with ribbons hanging from the brim. Gruyere is also known for making delicious Swiss cheese.

Other traditional women’s clothing includes gold lace caps in St. Gallen and dresses with golden and silver ornaments in Unterwalden. The male wears a short leather dress which is called lederhosen in the Swiss Alpine area. Slip-on leather shoes are common for both males and females.

READ NEXT:  Solo Travel in Switzerland under $1000: Backpacking Travel Guide

Most cantons or regions of Switzerland maintain different dressing style for Sunday (Sonntagstracht) and weekdays (Werktagstrachten).

Women’s “Sunday best outfits” are highlighted with floral embroidery which is nothing but needlework on hats, scarves, and shirt cuffs. Swiss women are trained in needlework and they embellish their costumes with embroidery.

Note: While embroidery used to be a popular home industry in the eastern and northeastern regions of Switzerland, but unfortunately it’s now limited to tourism because the Swiss people no longer dress in traditional Swiss clothing. However, The Swiss attires are significant in terms of their versatility and vividness along with their lively motifs and embroidery.

How to Spend 2 Days in Zurich on a Budget

10 Best Ski Resorts in Switzerland to Visit This Winter

Book Cheap Hotel for Your Next Trip